From the Resident's Room to the Chapel

Any recounting of the history of Fairfield Mountains Chapel must begin with Gary and Jennie Bruinsma, a Dutch couple who moved to Fairfield Mountains from Patterson, New Jersey, in the late 1970’s.  Having been part of a Christian Reform Church there and finding no Christian Reformed Churches in our area, they began attending the Rutherfordton Presbyterian Church.  As time went on, however, they felt that the Fairfield Mountains community should have a church, so they started hosting Wednesday morning Bible studies in their home.  As that core group became larger, all the families would take turns hosting it. At the Bruinsma’s suggestion, Dr. Pete Preston, pastor of Rutherfordton Presbyterian Church, was asked to begin teaching Bible study each week. Then someone suggested that they should have Sunday morning worship services, so these began in what is now called the “Residents Room ” in the lower level of the Bald Mountain pro shop, with Dr. Preston leading worship and preaching.  Soon after that, Dr. Philip Dunford began alternating weeks with Dr. Preston to lead Bible study and Sunday worship.

In June of 1983, our present pastor, Everette Chapman, was called to serve the congregation full time.  Before he came, the members of the Chapel had decided to build its own building, and before his first sermon, $120,000.00 worth of church bonds had been sold.  Before he preached his second sermon, the Chapel’s Building Committee had signed a building contract for $198,500.00 with Barlowe Construction Company out of Hickory.  Whereas, with the $24,000.00 already in the Building Fund, the available monies totaled only $144,000.00, and the building contract was $198,500.000, an additional $50,000.00 would need to be raised by the time the construction was completed.  Rev. Chapman issued a “$50,000.00 Faith Challenge,” and, in fact, over $80,000.00 was raised.  The new building was completed and dedicated on June 3, 1984, less than a year after Rev. Chapman came as pastor.    The congregation grew steadily over the next several years, but the mortgage balance was being reduced very slowly, so in time a conventional mortgage was taken.  Later, a very generous couple in our church dared us to pay off the remaining $100,000.00 mortgage in the year 1990, promising to give generously, themselves. Again, the pastor issued a “Bold Challenge,” and shortly into 1991, the debt was totally removed. In September of 1990, Rev. Chapman accepted the call to become the Senior Pastor of The Church in Aurora, a Community Church near Cleveland, Ohio.  A Pastor Search Committee was named, and the results of their search was that Dr. Mark Dunn was asked to serve as the next pastor. Dr. Dunn served the Chapel until April of 1995.  Shortly afterwards, Rev. Chapman was invited to return as our pastor and has been here since May 6, 1995. 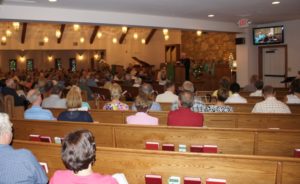 In 1998, the Chapel elders began to suggest the need to enlarge our facilities, because over-crowding on Sunday mornings had occasioned the need for two worship services, an arrangement that robbed us of the feelings of family unity which have always characterized the Chapel. A Building Committee was appointed, Vincent Wiegman of Asheville was retained as our architect, and early in 1999, the congregation approved an expansion plan which called for an outlay of approximately $600,000.00. Construction began and was moving along well, with the new building wings “in the dry,” when the building was struck by lightning and burned to the ground on July 28, 1999. For the next year and three months, the congregation worshipped on the covered terrace behind Lakeview Restaurant, moving into the ABC rooms inside during the coldest Sundays of the winter.  In the meantime, our new building was being built by Bittle Construction Company, headed up by our own members, John, Bonnie, and Brian Bittle.  They rebuilt our building at their cost, with only a small administrative fee added on.     On Sunday, October 29, 2000, our new Chapel, totally handicapped-accessible and replete with an elevator and a brand-new Cornel Zimmer Pipe Organ, was dedicated.  On that day, our morning offering, added to the gifts already given throughout the building campaign, resulted in our being able to completely pay for our new building, despite a $100,000.00 insurance shortfall. We never had a mortgage on our new Chapel, and still do not.

The Chapel has continued to grow steadily over the years, in terms of membership, attendance, and financial strength.  Rev. Chapman retired in October of 2020 and was honored as Pastor Emeritus for his long fruitful years of ministry to the Chapel.  The church called Chaplain Kevin Anderson to be the pastor in November 2020.